You are here: Home1 / About Me 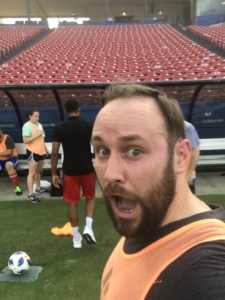 I’m Drew Epperley. For some reason you’ve stumbled onto my little part of the Internet world called epp6.com. For those that don’t know what “epp6” means it’s basically part of my last name (“epp”) and my favorite number (“6”).

Now this little section is supposed to be about me. Who am I? Well in a nutshell I’m a pretty simple guy. I love my wife Becca, my dog Rigby, my family and Jesus. I’m crazy about soccer, alternative rock, Chick Fil A, and playing whatever game feels right on my iPad.

I’m a part-time writer with a crazy soccer blog called WVHooligan.com (I ran this site between 2007-2015). I also am the Managing Editor over at BigDSoccer.com, a Dallas-based soccer blog that covers mostly FC Dallas.

I currently work at Highland Park United Methodist Church as the Digital Content Manager. I previously worked for a Dallas-based media agency called Wieck Media as a Project Manager and Content Manager.

I’m a big sports guy. I did sports radio in college at WWVU FM in Morgantown, WV while attending West Virginia University. While at WVU I got my degree in Journalism with concentration in Broadcast News. I also minored in Sports Psychology. I still follow everything WVU that I possibly can. They always say “once a Mountaineer, always a Mountaineer” and that rings true with me.

I’ve been around the internet for far too long here and have seen it grow beyond anything I could have dreamed. Same goes with this little website, which I’ve had now for over a decade.